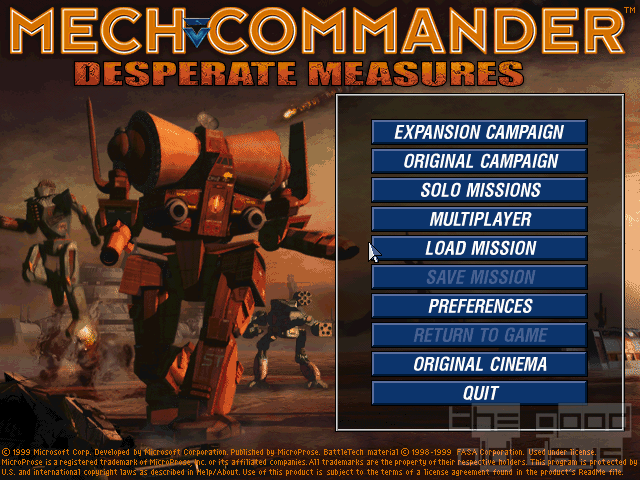 By the mid-1990s, PC gaming had been almost exclusively taken over by 3D shooters and so-called real-time strategy. Both genres were inherently computer-based, due to controller restrictions on console systems, leading to quite some passionate pride on the part of PC proponents who overall found themselves in a defensive position in this era. Though the huge success of the genre beacons (in the real-time strategy genre: the duopoly of Command & Conquer and Warcraft) came at a price. All the other companies wanted a slice and imitated the same formula very closely. By 1998, the genre had already driven itself into a dead end.

Mech Commander, along with Commandos, brought in a bit of a fresh breeze. Doing away with the simplistic Sim City like base building and mission-internal technology and unit upgrading (which, honestly speaking, never made much sense anyway), it focussed on tactial battles only. Notwithstanding, between few military units only, when Blizzard's latest outing, StarCraft, was just celebrated for the “Zerg rush” (an early mass assault strategy). On the presentation side, it was the antithesis to the over-produced Command & Conquer series. After the filmed intro, only a short, tiny video snippet was shown as partial briefing every couple of missions.

What it came with, on the other hand, is the official BattleTech licence. In my late teenage years, I played the original tabletop a little bit. The idea of the hulking, giant robots, heavily armored, but also equally heavily armed to take each other apart appealed to me. Equipping those battle machines by hand, pondering whether to take a heavy auto-cannon to apply one deadly shot (if getting close enough) or instead some mid-ranged, dependable lasers. Plus, the influence and role-playing-like development of the pilots lead to additional compelling complexity. Ironically, the best attempts at converting this tactical experience up until this point had been inofficial rip-offs: an obscure (and a little bit clunky) Amiga shareware game called MechForce and more recently Dynamix' MissionForce: CyberStorm. And then, with all the expertise of FASA itself and the marketing power of Microsoft behind, came Mech Commander. 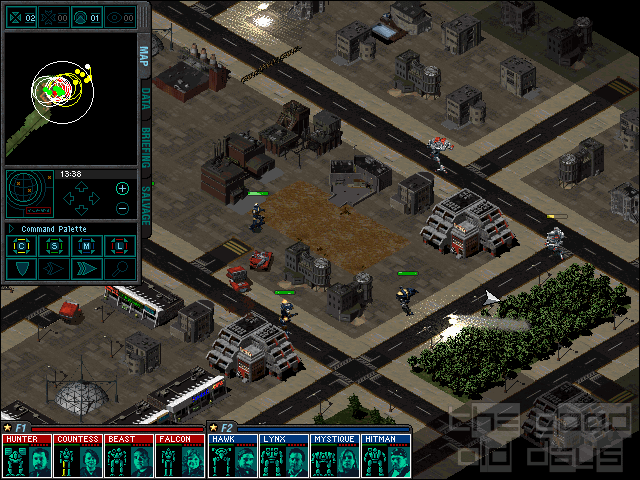 The game gathers a lot of the original's appeal. It has the typical scenario of the “Inner Sphere” battling the “Clan”. Within the lore of this world, the clans, having left the world a long time ago, have developed superior technology in the meantime before returning to re-conquer. Being put in the shoes of the therefore outgunned party is a great scenario to start with, as it does put a lot of focus on smart tactical operations.

Then, of course, there is the aspect of equipping mechs. While the default configuration may be fine, specific missions may require rethinking. Will fast mechs be needed for a quick guerilla-like surprise attack? Are targets to be taken out by long-ranged missiles? Will anyone need jump jets? Oh, and which pilot to trust with this clan weaponry salvaged from the previous battlefield? Missions typically allow for one or two handful mechs to be used. Both the well-voiced pilots and the mechs themselves therefore quickly grow dear to the player and losing one can already be a significant hit in the overall war.

The nature of the missions is fortunately also quite varied. There is the typical “destroy everything”, but then, there are also convoys to protect, specific targets to be taken out while avoiding patrols etc. Though then, at the heart of things, the game still cannot live up to all expectations. Ironically, it just can't live up to the expectations in the core area of tactical depth. 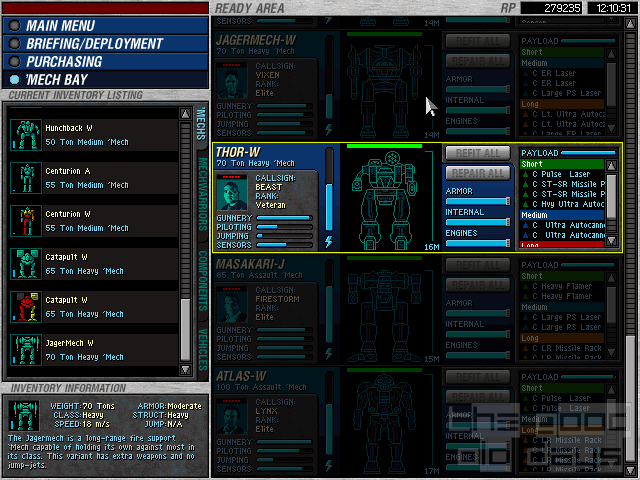 The main reason being actually mission design. The way the maps are layed out, Mech Commander plays more like a puzzle game than an actual tactical wargame at times. Sure, there are basic tactical decisions to be made, such as whether to take out the heavy guns of a fortress from a safe distance or to risk a Mech breaking through to capture the gun controls and later use their firepower against the enemy. Though then, usually, when there is a target to attack, there isn't just the heavily fortified and guarded front, but also some quite visible path through the woods to sneak around and attack from behind instead. This option being so obviously suggested to the player, one can't feel smart realizing it at all. There is one intended way to approach each mission. Take it, and chances to succeed are good.

Further on mission design, the game heavily relies on scripted events. Remember how in Dune 2, all levels played exactly alike? Build a base, defend against attacks and once you've built enough heavy tanks, counterattack. Some games later, someone had the rather smart idea to shake things up a bit. Re-enforcements would arrive. Bombers would swoosh in. A new urgent objective would be transmitted mid-mission.

Reliance on this strengthens plotting and increases adrenaline output, but it weakens tactical depth, as even the best strategy can be completely spoilt by the unforeseeable, to no fault of player. Mech Commander unfortunately simply expects to play missions several times in order to know in advance what will happen. 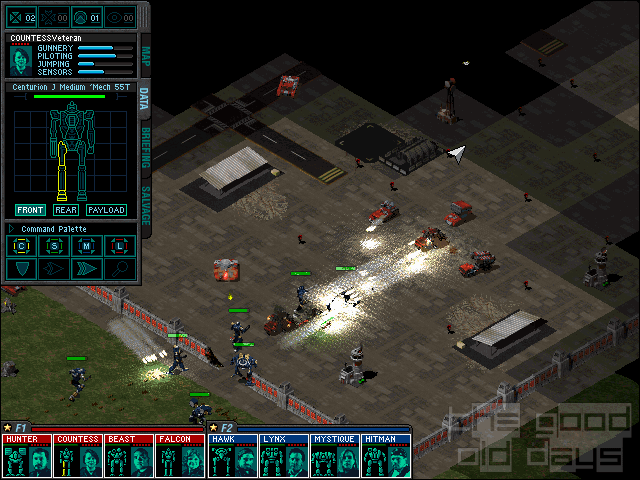 Last, but not least, even the mech configuration part takes a turn for a bad. Clan loot, equipment and even complete mechs, makes too strong a difference. Get lucky in an early mission and get your hands on an intact Hunchback IIc (for example) and all the next missions will become considerably easier with this highly destructive new weapon at your disposal. This, then, of course, is subject to the avalanche effect, i.e. getting lucky once and therefore becoming stronger, the chances of subsequently gaining more of such loot increase further. One or two such lucky hits at the beginning then usually turn into a whole squad of Thor and Loki clan mechs towards the end of the campaign, making the last missions (ironically) almost a walk in the park.

Sure, the makers may argue that this is by design. After all, they did include the option to give one's own pilots orders to target specific parts of the enemy mechs. Shooting their legs, for example, disables their mobility. Aiming for the heads and succeeding gives a good chance to catch an only semi-destroyed clan mech which can then be repaired and used. In theory, it all comes together. Just that risking such maneuvers is a pure game of chance. Even with the best gunners, exact aiming decreases overall chances to hit significantly. So do you risk going for it, for the chance of better mechs for future missions, but at the risk of being taken apart in the process? There is no interesting tactical or strategic decision behind. It's just a spur of the moment choice and keeping the fingers crossed.

Where does all this put Mech Commander in the global ranking of tactical mech games? It really depends on the player expectations. The game plays rather well and looks good even today: the static isometric perspective thankfully precedes those badly aged freely zoomable and turnable 3D perspectives which entered the genre soon after. Sound design is equally good, with appropriate music and effects. Certainly, the other games mentioned earlier offered much more actual depth. Though then, the adrenaline rush when after ordering an air strike against the enemy base's power generators, seeing them explode and breaking through the formerly solid walls and quickly blasting the crew barracks before they can man the otherwise deadly vehicles is for sure much stronger here. Mech Commander is much more immediate, direct entertainment than the rather abstract joys of more conventional tactic implementations of the same basic concept. Quite enjoyable for what it is, but not the big turning point for the real-time genre it probably seemed to be at first glance. 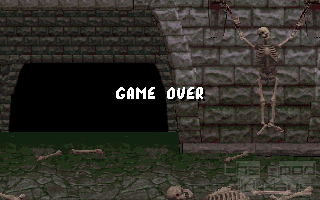