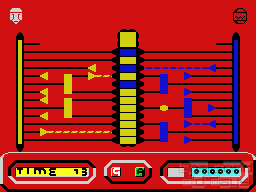 Paradroid had been a huge hit on the C64, so ports were the logical step. For the Spectrum, Graftgold decided a straight port wouldn't be possible, as the game very much depends on the smooth scrolling into all directions. And while they were at it, they decided to change quite a few more things on the way.

In Quazatron, you play a kleptomanic robot loose in an underground complex populated by other robots. Any explanation to have robots go at each other's throat is fine with me...

The top-down perspective has been replaced by an isometric view reminiscient of Marble Madness. Add the ramps going up and down and last, but not least, the robot models, and the game looks pretty much like a predecessor of Virocop which Graftgold would go on to make almost ten years later. This looks really good, but the scrolling indeed is quite bad. The screen only scrolls if you touch the side, and even then, it moves atrociously jerky and slow.

The heart of the game is still very similar to Paradroid, though: Your robot is trying to take over other robots by sending electric impulses into simple circuits and thus changing tiles into your colour. If you defeat your opponent, you... don't take it over completely (like you do in Paradroid), but you get the chance to take its drive, its weapons, its armor and so on. All these components can be incorporated into your own robot shell. This way, your outer appearence never changes, but the 'inner values' do.

Back then, it might have been bad for Spectrum user and the C64 crowd to miss each other's game. Then again, exclusives are what make a system distinct and interesting. From today's perspective, it's great anyway, because now we can enjoy two classics instead of just one. 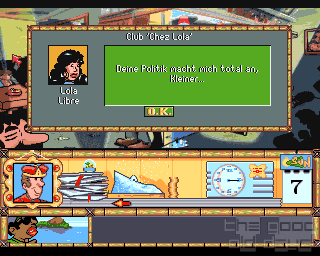