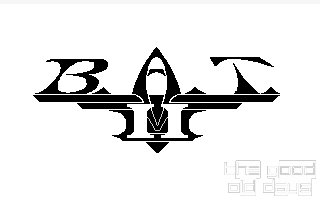 The Bureau of Astral Troubleshooters, an intergalactiv secret police, had already made a name for themselves in the episodic, self-titled first game. Now it is time for the big job: The Koshan conglomerate has come into a monopoly position as the only supplier of a resource of galactic importance. Through foul play, of course. B.A.T. has already sent one agent to Koshan's base planet, but in spite of a seemingly perfect cover story, she seems to have been detected. So the player goes after her, to save her, but also to finish the mission.

What follows is one of the most complex, stylish and multi-faceted challenges ever devised in the history of computer games. While many companies were using the opportunity of computers becoming ubiquitous in people's homes to produce and sell games which could be understood and played intuitively due to their adherence to standard genres conventions, some developers continued the tradition of freeform mash-ups as it had been common especially in the mid to late 80s. 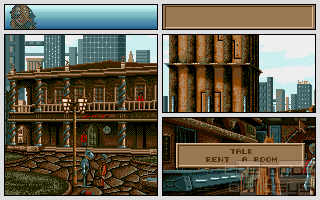 Don't mistake this for experimentation. That phase was indeed over at the time games like B.A.T. II were released. For such games which did not fall within the one-dimensional borders of the established genres, it was a time of perfecting their respective niche concepts. So just like, for example, Mike Singleton refining his Midwinter concept in the course of three games, the developers of ESP extended on the foundation of the first B.A.T. game, which had been quite an achievement two years earlier.

This game is probably best described as interactive cyberpunk comicbook. The scenery is presented in overlapping 'panels' which are opened and closed as the flow of the game requires. Usually, when the player moves to a new room or location, a new panel is opened in an area of the screen which had previously occupied by something else. This is not only an interesting visual effect, but it also helps keeping a better idea of the links between the visited places. On the downside, it often confines the actually active screenspace to just a fraction of the overall available estate.

The interaction is fully mouse-driven. Relevant hot-spots in the pictures are highlighted when moving the mouse over then: Exits turn the pointer into an arrow (implying movement), people show a talking face icon instead. General status information can be accessed through the protagonist's bionic computer implant at any time. It's all quite intuitive and definitely never gets in the way. 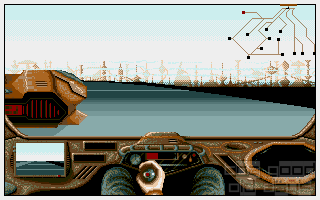 Which leaves the gameplay, and this is the tricky part. The player walks around and interacts with objects and people like in an adventure game. Just that the protagonist also has got RPG-like character stats which play an important part in the direction the game will take. Or that the protagonist can recruit more people to help and accompany him, finally forming a classic RPG-like 'party'. Which can then be used, for example, in tactical combat. Things don't stop there, either: Travelling around the city (and later even into space), the player can either opt for hiring drivers and pilots to help him get around or take the wheel himself, leading to three dimensional action/simulation parts. And how does the protagonist earn money? By playing mini-games in an arcade.

The point being that this mixture of activities never comes across as forced or artificial. Apart from the arcade/money scenes, everything just makes sense to do it in this way. That is why B.A.T. II is so successful as a 'world simulation': What the player might attempt, without thinking much about gameplay conventions, will probably 'just work' in this game. The player is hardly ever restricted by arbitrary genre limitations. Which makes this game one of the closest cases of immersion into a game almost to the point of forgetting that it is a game: Instead of trying to figure out the exact rules of the game in order to use them to win, the player will try to figure out the world and its participants.

In spite of all this praise, B.A.T. II is not a game for the impatient, of course. It is the exact opposite of today's 'casual games': engaging, involved and challenging. A hallmark of what computer games could achieve! 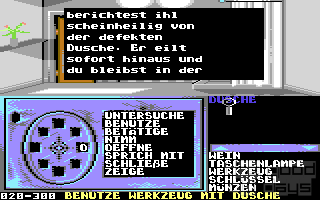