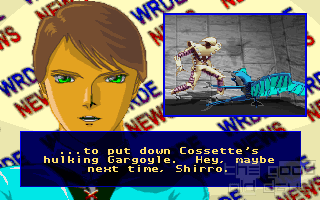 Its emerging shareware scene was one of the main draws towards the IBM PC platform for gaming in the early 1990s. Unlike the tightly controlled games console ecosystems, this platform gave smaller developers opportunities to make something against the usual conventions and consequently drew players as well. 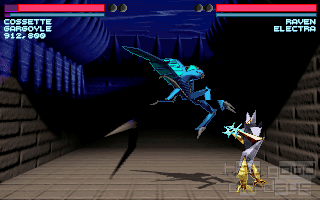 Published by Epic Megagames, one of the “big 2” of the shareware market, One Must Fall gives a spin to the one-on-one fighting genre which had been tried a couple of times before, but got buried under the typical special move extravaganzas of the early 1990s. Namely, it puts a lot of focus on character development over the course of the game.

The first specialty is that it separates character and equipment. The fighters don't actually brawl directly, but use robots to battle their differences out. Both the characters themselves and the robot avatars have distinct abilities which can be trained and developed; it is even possible to buy a completely new robot if budget allows. Which, then, comes at the cost of having to retrain some new abilities again (both virtually in-game and extrinsically on player level).

Competing in various tournaments in career mode, you not only have to win the encounters, but also try and keep your own robot intact as far as possible, as prize money needs to be first used for repairs before the rest can be invested in upgrades. These balancing acts provide some welcome global context to the regular fighting. 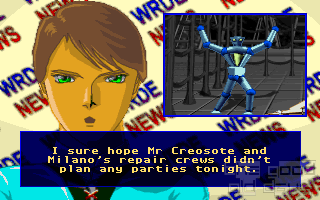 The dual button controls work very well, even using a keyboard. Gameplay is fluid and speed can be configured. External hazards in the arenas – like emerging spikes or attacking fighter planes – spice things up randomly, but fairly. The extremely catchy title tune is sure to grab everyone's attention immediately. Post-fight media coverage and interactions with the grumpy mechanic provide some welcome flavour as well. And in two-player mode, there is even a handicap setting to enable fair competition between differently skilled players.

Overall, OMF may not be the flashiest fighting game of its time, but it may nevertheless be one of the best. It emphasizes somewhat careful development strategy over pure reaction gameplay. In that way, it is a type of fighting game which could only exist on a computer ecosystem. Whether you prefer this over the more common alternative is up to you. I know I've made my choice.

P.S. Originally distributed as shareware, OMF has been released as freeware in the meantime.

One Must Fall was supposed to become a Street Fighter clone for the PC, but then the developers decided to set the game into the future instead and add 2097. This is the year the single player mode plot takes place in. And this is where the first difference compares to Street Fighter and other fighting games comes in. You don't select a fighter, but a pilot and a robot.

Although these pilots all have their little background story, or rather description, those are not particularly important. What is important is those three values which are listed next to the fighter and determine how hard the pilot can hit, how fast he can move and how many hits he can take before becoming dazed. Once you have selected a pilot, you have to select a robot, which is then coloured according to the selected pilot. Robots come in different shapes and sizes and the size is actually of some importance. If you have long legs, you can kick your opponent before he is even close enough.

On top of that, each robot has got its own special moves, which also encompass some combos. The actual special moves are listed in the manual just like in Street Fighter 2 and they actually resemble that game when it comes to execution. For example, the Nova's rocket launcher has a similar key combination as the Hadouken. Speaking about the Nova, this robot is not playable in a normal game, because it is reserved for the evil boss opponent. That guy being a trans humanist and has ill world domination plans in mind. Or at least that is what he would have said in his speech, if he hadn't died.

Apart from single player mode, there is also two player mode and demo mode. For the former, you need a friend, which also works over a modem or a network. In demo mode, the computer fights itself. So far, so boring, but then fortunately, there is also tournament mode. And that is where the game really packs.

You begin by creating your pilot, giving him a name and choosing one of four pictures. Using your startup capital, you buy yourself into a league, train your stats and improve your robot. This is when the “league” can really begin. In this league, you always compete against subsequently stronger opponents; if you beat the champion, the league is over. Just imagine: You are Salford City and buy your way into Premier League; if you beat Manchester United, the seasoin is over and Salford City is the new champion. On the other hand, the league can also go on forever, unless you lose too often.

Losing isn't all that bad basically, but the robot's repair costs can drive you bancrupt. Once the mechanic doesn't receive his money, he starts selling off robot parts instead. If nothing is left, you have to work to get money. Which means being thrown out of the league and losing stats. The mechanic, by the way, was also a great fighter once, according to himself; just why does he need to earn money now, then? Apart from the mechanic's comments, there is also some small news coverage about the fight on TV, although this repeats itself after some time.

So much about the frills, but let's talk about the actual fighting and what makes the game so great a little in the end. One Must Fall, like Street Fighter 2, a spatial fighting game where it is the player's task to minimize the opponent's capacity to act. So primarily, you are concerned with making sure that the opponent cannot move, or at least only in limited spaces. Preferably those which you can counter well. What helps is that the opponent is stunned for a moment after each hit. What doesn't help is that the opponent is invincible for an even shorter moment after each hit. And, as already mentioned, each punch or kick covers a different space. Just like your own hit zone adapts according to your action. Keeping all this in mind, what you have to do is to keep the offensive hit zone between yourself and the opponent so that he cannot manage to build his own, reaching you. Then, you won't even need a lot of special moves and you can rather concentrate on combos, which earn you more points and money in the end anyway. 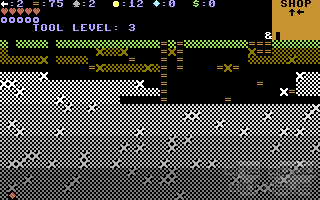