Rise of the Robots
for Amiga (AGA) 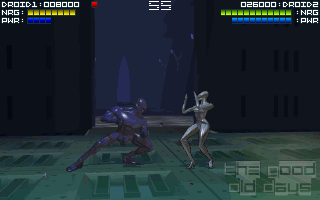 Whenever a game generates a lot of hype, it exposes itself to possible attacks. These days, Rise of the Robots is subject to general ridicule, also based on the 90% ratings bought by TimeWarner at the time. Overall, it is not undeserved, as indeed it isn't a good game and it wasn't at the time of its release, either. Nevertheless, one has to ask how far today's Internet commentators have actually made up their own minds or whether they are just following the common echo chamber strategy.

Before publication, high expectations were raised based on the developers' boastful promises. TimeWarner, just having entered the computer games market, put enough money behind to transmit them into the world at full volume. “Multimedia” was the latest and greatest, and Rise showed freshly rendered robot models along with a soundtrack from Brian May of Queen fame. Gameplay was also supposed to put them genre on its head, with computer opponents which wouldn't just react quickly (the common advantage of computer-controlled fighters), but would also learn from the player's actions. 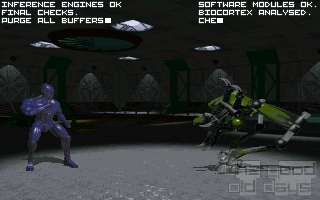 Save for the pre-rendered graphics straight from 3D Studio, not a lot of this was left when the game was actually released. May's music couldn't be used due to licencing issues (with the exception of a short guitar riff in the main menu). Advanced artificial intelligence certainly cannot be found watching the usual gameplay videos these days. Sure, it is so easy to mock the game for being winnable by just constantly applying a jump kick… when you omit having selected the lowest difficulty level.

Nevertheless, there are some things to say about difficulty. There is no level which is actually playable. The first one is won trivially, not unlike in better titles, but usually, it increases gradually… while Rise makes a huge jump above “medium” which makes winning almost impossible. Just that it isn't due to advanced artificial intelligence.

What scales is the proportion of punching strength between the two opponents. Conceptually, the idea is that punches and kicks can have different strengths, depending on how long you press the fire button. So far, so good, as this could enable different tactics. Do you attack with quick combos or do you rather rely on few targeted and highly destructive hits? It's just that on higher difficulty levels, even maximum strength hardly makes a dent – any hits below that prove useless. It is a sad admission that the promise intelligence apparently didn't work out as planned. 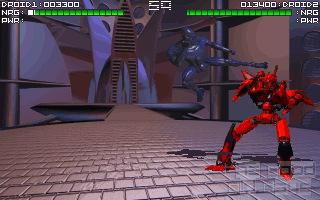 Yes, this is how you win… on lowest difficulty

At least, this should be clear by now, there are some fundamentally good ideas inside. Almost defiantly, Rise positions itself against the special move zeitgeist launched by Street Fighter 2. You have to do with basic moves, but use them with caution and in a targeted manner. It is an enhanced model of Karate Champ which may have come some years too late, as the genre had already gone down different roads – but it shouldn't have been a cause for mockery.

This leaves graphics and animations. The latter are quite fluid, built from a nice number of frames. The 3D models are quite detailed, but from today's point of view, they obviously have this typical plastic look of the time. It hasn't aged well. Similarly typical for the time and clearly detrimental to the overall visual impression, the robot models do not organically fit into the backdrops. These static pictures are really not an asset to the game and the opponents seem to hover over the ground. This effect turns even worse when activating shadows (deactivated by default for a good reason).

However, in 1994, this all looked very cool (apart from the shadows). It's just that the game offers only seven such robot models (which, in spite of visually promising designs, hardly exhibit any gameplay-relevant difference) – and those only rendered from one side. The blue player robot only exists on its right side, all the others can only ever be seen from the left. The opponents can never switch relative positions. Jumping over them or otherwise passing them is impossible. 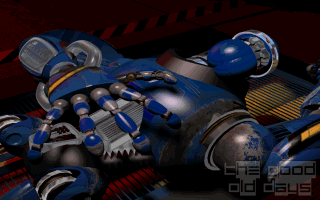 The future of the past

This restriction is likely intentional. The likely core dilemma of the game, which could explain some of its weaknesses, is that it was thrown on the market too early. Rise of the Robots should have targeted the Next Gen consoles, with a CD as storage device and more horse power under the hood. Though those were still not really available on the market. So they had to do with devices like the SNES or the Amiga.

The box contained 13 floppy disks – who knows how many it would have been if it had included the promised soundtrack, robot models rendered from two side or even additional robots? It just wasn't possible with floppy disks or cartridges. On top, a faster CPU or graphics chip could probably have solved the issues of delay between player input and rendering on the screen.

No, none of this is a good excuse for the poor core game. As far as this is concerned, Rise of the Robots gives the opposite impression: of having been released too early. Going back to the basics could have been viable in such an overloaded genre. With the right execution, it could have worked. Though one has to suspect most of the development time went into the almost impossible task of getting this tech demo to run on small machines in a somewhat acceptable way. Pity, because a stylish robot fighting game could have been a nice change from the usual orgies of spurting blood. Don't despair, this actually exists elsewhere. Even if less expensively produced, but full of original ideas and immaculately playable. Let's give Rise of the Robots its deserved rest.

Unfortunately, everything you have read about this game is true. Well, not everything. Those paid reviews at the time of release putting the game in a 90% rating range aren't. But you know that already. Why should I even bother to join in and repeat it all? Well, I've been reviewing a shitload of fighting games lately and somehow, the run wouldn't be complete without this one. So let's get it over with.

Gameplay, as you know, is terrible. In single-player mode, you can only be the blue robot. It doesn't matter much, though, as all of the others play very similar anyway. There are only very few moves available and in beginner and easy mode, you'll only ever need one. On medium difficulty, throw in the occasional special move. In hard mode, the game is completely unbeatable. Though not, because the opponents act all smart, but because even maximum punch power will hardly make a dent anymore. Wait, special moves? No, sorry. What this game calls a “special move” would not classify as anything but a bog-standard attack. Which, of course, does not make them any easier to carry out. Two-player mode is unplayable, because player one (who has no choice but to be the blue robot) always wins.

Surprisingly, even today, the game's audiovisual presentation is almost universally praised. So let's instead focus on that. So, according the the Time Warner marketing department, the music has been composed and performed by Queen's Brian May. This is actually restricted to one single guitar riff in the main menu. The fights are silent apart from some amateurish clunking sounds. The ending music is a standard chiptune. Graphics indeed come from the then popular 3D Studio, which had the effect of making every single game look the same. Want to know the link between this one and Command & Conquer? 3D Studio! 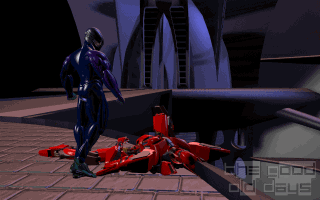 Though even if you like this standard look of the mid-90s, sorry to say, Rise of the Robots is not much to write home about. The backgrounds are completely static. No interaction, no scrolling, no movement. The robots themselves are fairly well animated and have some graphical character, but the designers couldn't be arsed to render a sufficient number of distinct ones, so the first five opponents are just looped and you have to “re-defeat” them. Even with the exact same rendered cut scene introducing them. Oh, and even those seven robot models (blue guy, five repeated opponents plus end boss) don't exactly fit into the scenery. First of all, they have only been rendered from one side, leading to the obvious gameplay limitation of not being able to turn around. Second, it never looks like these figures are actually standing on those “surfaces” (background graphics). The default setting, by the way, is “shadows off”. Wise choice, because they are just flatly overlaying the robot models. Nice way of breaking your own visual perspective and model! Cut scenes (straight from 3D Studio) are extremely short and really not worth playing the game for.

Now, of course some may now argue that it is unfair to judge a game's 1994 graphics by today's standards. Though consider two points. First, pixel graphics from that time often still look very good. Second, if it was considered necessary to bleed off colours so far that it is hardly recognizable what is going on, then this is simply not acceptable. At no time. Wait, that's a good conclusion. For the whole game, not just its graphics. 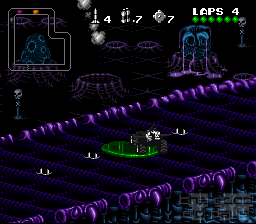