The Fourth Protocol
for C64 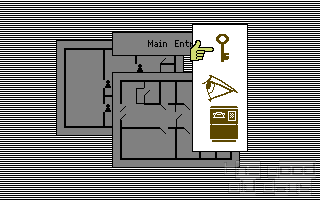 The Cold War... since you're reading this review of a mid-80s computer game, this probably isn't just something you learned from history books. It also filled another kind of book, though: for spy novels, it provided the perfect background. A very successful release in the genre was Frederick Forsyth's The Fourth Protocol. The basic plot: Evil communists have devised a plan to finally tip the balance in their favour. 'Plan Aurora', as it is called, involves smuggling a nuclear bomb into the UK and detonating it, making sure the blame goes to the USA, thus destabilizing the western alliance.

In The Fourth Protocol, the computer game, the player takes over the role of the novel's protagonist, John Preston, an agent on medium hierachical level in MI5. The game is split into three parts which can be played individually, but the second and third each require a password which the player only receives by completing the former.

First, there is The NATO Documents in which Preston spends his time exactly the way most agents do: sitting on his desk. There seems to be a double-agent inside MI5 who is leaking secret documents. Obviously, he needs to be uncovered and caught. Inquiries, memos and reports from colleagues and departments are arriving and the player has to deal with all of them. Most suspicions aren't even related to the problem of the leaked documents, of course. Yet, how to tell? Your main weapon are the watchers, i.e. people trailing whomever you assign them to.

After that, in The Bomb, the assignment is to locate the nuclear device which has now arrived in the country. Gameplay changes a little. Many more classic Adventure elements are now present as Preston takes action outside of his office. Finally, there is The SAS Assault which deals with taking control of and disarming the bomb. This part is a full-fledged and (apart from a little shooting) pure Adventure.

This genre mix is interesting: The second part serves as a bridge between the other ones. Using the icon-based interface of the first part, but being closer to the gameplay of the third part. It is unfortunate that this hybrid episode is the weakest of the three. In spite of the very weak parser found in the final one. What's really shines is actually just the first one. There, the player can really concentrate on solving the complex issue at hand instead of fighting against an interface or dealing with fairly trivial puzzles.

So in the end, the first part is very recommendable and it stands very well on its own. The other two are a nice addition for fans of the espionage genre which can safely be considered optional by regular players.

You must be thinking of the third episode in relation to the parser. It's really bad; for example, you start with a machine gun in your inventory. However, attempting to refer to it (even examining it) only results in the noun not being recognized - in spite of typing it exactly as it appears in the inventory description. 'examine gun' doesn't work, either.

If your current self agrees with your eleven-year-old version, just add your rating the the entry!

jim (2009-09-30):
I remember playing this game on my parents' C64 about twenty years ago. I think it was acquired as part of an odd lot of software we were given when a neighbor "upgraded" to an IBM of some sort... My main negative memory of the game was getting frustrated because the parser was not what I was used to after playing Infocom games for hours on end. My main positive memory is the realistic presentation of espianoge, as the game showed that "real spies" spent a lot more time shuffling papers and observing "the adversary" than blowing things up and romancing exotic secret agents. I'm probably thinking more of the first segment, as it looks as thought things get a little more dramatic later on. Unfortunately, I don't remeber enough to give a real opinion about gameplay, but I probably would have rated this 4 out of 6 when I was eleven.
[Reply]