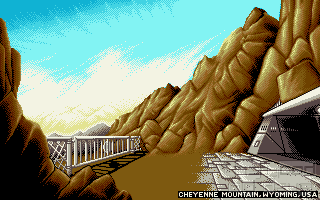 You have been enrolled to fly the newest high maneuver tactical aircraft F29. It is supplied with next-generation equipment and armament. You are to carry it through a row of missions taking place in various flashpoint regions of the globe which will include both air-to-air and air-to-ground tasks of eliminating enemy jets, convoy, submarines and various strategic objects.

F29R is a 90's well-known and popular combat flight simulator. I would further conjecture that this here is 90's most successful flightsim notwithstanding rapidly aging graphics and certain discrepancy as to real jet fighter experience compared to a profuse number of similar games. The reason being, F29R is an optimal combination of traditional 3D flight simulation and pure action, which, in my opinion, makes it the most playable modern combat flightsim ever made. It first came out in 1989 as Amiga and Atari ST port, and one year later there was released a PC version, whose only principal difference was implementation of head-to-head mode to play via modem against real human opponent, which for 1990 game is a rare plus.

According to game's message F29 is apparently a full-blown next-generation vehicle stemming from Grumman X-29 Swept Wing experimental aircraft used as a prototype, which, though, never saw the light and remained fictitious. Apart from F29 you can also choose Lockheed Martin F22 Raptor, which is an existing aircraft developed inside ATF (Advanced Tactical Fighter) program of US Air Force, whose entire object was to come up with a worthy response to Soviet MiG-29 and Su-27 menace. Other than outward appearance there is really no difference between these crafts' parameters as to the gameplay.

The graphics are disputable. It may look slightly dated in contrast to some of the contemporary flightsims like A-10 Tank Killer, Falcon 3.0 or F-14 Tomcat. The scenery, landscapes, clouds, aircrafts are clearly not as detailed and look pretty “sketchy”, which is typical for the majority of early simulators. Although the game supports 2 video modes - EGA and VGA, the latter is far from pushing the limit. However, none of this seems to matter, as all the afore named limitations prove to be an optimal choice for the best quality and performance as opposed to sluggish “realism” of, say, Microsoft Flight Simulator 5.0. Can't say the physics of the game are perfect though, but they are more than acceptable for 1990 (1989).

In the beginning you enroll by introducing your name and choosing your desired military rank ranging from 1st lieutenant to colonel. No, this isn't charity or a bad joke, but simply a way of selecting preferred difficulty which is expressed in increased levels of realism such as limited ammo (if senior than 1st lt) and certain other vulnerabilities. In other words, if you're 1st lt you shouldn't worry about arming your aircraft as there's always unlimited ammo supply. Speaking of which, here you have 5 various air-to-air class homing missiles with different range, 4 air-surface ones, plus the machine gun. You can practice shooting down enemy jets and bombing ground objects by choosing 'Zulu Alert' which doesn't include takeoffs and you start immediately in the air or you can proceed with different scenarios which are all real war campaigns consisting of various missions. Well, except 'American Desert' which is set in Arizona and is really a series of training missions. Anyway, to you as a player that would make little difference. Each one of these will require you to take off manually, destroy a specific number of enemy aircrafts, locate and destroy various other objects and when successful return to base, which means... yes, that's right, this time you have to LAND manually same way you took off, only this happens to be 3 times more difficult and it takes a whole lot of practice before you do it right. Until then get ready to crash, crash, crash...

Taking off is a piece of cake. Remove brakes, press 'Z' to start the engines and off you go. Controlling the craft while in the air is also comparatively easy. Steering is smooth and highly responsive. You can switch display views from various cockpit positions to external, satellite etc, 12 in total which are all invoked with F1-F12 keys respectively. You can develop and decrease velocity, fly as low as few inches above the ground or as high as to hit the sky (who of us didn't try going into outer space in a flightsim?), which literally does happen when you reach critical altitude and your vehicle starts tilting and pulling back. Tell you what, this is probably the only game which allows you such luxury, as I don't recall doing something similar in other sims, where I would crash much much sooner. In that sense F29R gives you way too much freedom. Let's face it, few of such games were really playable due to sad paradox that their authors would typically endeavor to approximate visuals and controls as far as possible to real aircraft experience which would all too often result in boredom and ultimately loss of interest. On the contrary, F29R partakes adequately of traditional 3D and arcade shoot-em-up type simulation similar to that of Afterburner or famous Top Gun, where the control method isn't as precise and painstaking to the point of sheer aversion, which is a crucial factor so very underestimated by many game developers.

Additionaly, your metal bird is equipped with various handy devices such as enemy radar, ECM system, map display etc, each of which, mind you, may get damaged if you are hit. If the damage is critical and you're falling you can bail out by pressing Escape button and watch yourself slowly drift down on a parachute. And lastly, there is but one more small problem here: FUEL. Yes, it does run out and is technically a substitute for time. When choosing armament you can pick an extra fuel tank but that would obviously take up space needed for missiles, which means it is only to be done in special cases.

Now what I really don't like about this game. Once again, in the best Cold War traditions (and particularly its western participants) the only side you can pick here is NATO and the only enemy you have are the Soviets and presumably WAPA satellites flying MiG-29 and Su-27 aircrafts. Same exact approach is used in a number of other sims of the same era like Abrams Battle Tank for instance. A piece of shit propaganda like that gives the product a bad name, and my opinion is that games should stay out of the politics. I mean, seriously, why would an average consumer somehow unwittingly get involved in this? That's mind-rape, folks, something I strongly despise and deeply abhor. And that is a reason enough for me to give this game only 3 points from otherwise 6. You know, they could at least make it fair and square by allowing to play for both sides separately as a matter of preference. Oh yes, and the speaker SFX in the game are horrible, while the music is Adlib/SB.

Moebius:
Too bad Herr M. isn't around anymore, thought it would be good to let him know, that i've been playing Apache Air Assault (2010) since winter and only now have realized that it's actually made by a russian company (Gaijin Entertainment), and, yes, in this game you can fly Apache AH-64D Longbow attack helicopter or russian Mi-35. The game is nice, though without a multiplayer there isn't much to do. Once you have completed all missions you can just remove the game, unless you wanna practice free flight some more.
Moebius:
Quote:
Just out of curiosity: Are there any Russian (or Soviet) flight sims that let you fly American aircrafts?

Herr M.:
Originally posted by Moebius at 18:26 on January 10th, 2016:
Once again, in the best Cold War traditions (and particularly its western participants) the only side you can pick here is NATO and the only enemy you have are the Soviets and presumably WAPA satellites flying MiG-29 and Su-27 aircrafts.
As much as I have to agree with you, I guess tensions where still far too high, even back in 91, and selling a (serious) game in which you play the Soviets was simply unthinkable in the US, as interesting as it might have been.

Moebius:
I knew this would again be the subject of our discussion

Mr Creosote:
Quote:
It first came out in 1989 as Amiga and Atari ST port, and one year later there was released a PC version, whose only principal difference was implementation of head-to-head mode to play via modem against real human opponent, which for 1990 game is a rare plus.
Once again, I'm questioning the release dates. ACE reviewed the Amiga version in its June issue of 1990. The PC version 'soon' coming out was announced in February 1991. Do you have contradicting information? (Copyright year is not always release year, in case that's the problem.)
[Reply] 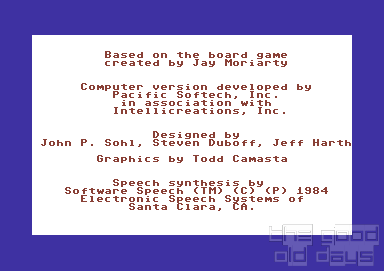