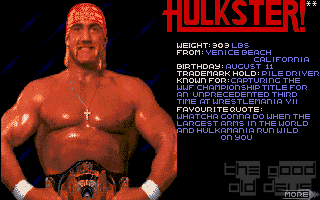 A wrestling game on the Amiga made by Ocean in 1991? This couldn't have gone right! Surprisingly, it is not nearly as bad as expected. In decent graphical style – with big, distinct sprites – large men homoerotically grab each other and it is fun! There you have your conclusion. 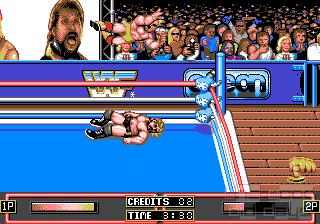 Let's talk about some details anyway. The game was indeed released at a difficult time for the WWF, apparent in the game's line-up. It is headed by Hulk Hogan; although the 1980s icon, he was clearly growing old at the time, his image shaken by scandals. Joining him are the Ultimate Warrior, the least interesting character in the history of the “sport” and the British Bulldog – a newcomer at the time who never made it to the top even later. Those three are the only playable characters. On the antagonist side, we get a mixture of 1980s has-beens (The Million Dollar Man, Mr. Perfect, Sgt. Slaughter) and rightfully forgotten competitors (The Mountie?). In a sport which draws much of its appeal from the identification with the colourful characters, this is not a great start into the game. There were good reasons why WWF management build up new headliners soon after.

Anyway, following some repetitive, canned insults, things are supposed to get hot in the ring. On top of standard punches and kicks, a number of typical wrestling moves have been included: drop kicks, throws, climbing on top of and jumping from the turnbuckle, you can leave the ring (risking count-out) and even grab and use a chair there. Grappling takes a central role in the fight. This duel of strength is simulated (in best sports games tradition) by waggling the joystick. 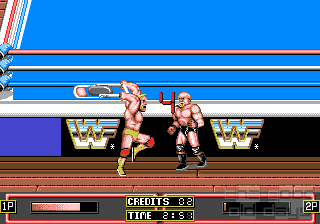 So both graphics and gameplay are surprisingly alright, making a solid foundation for a pretty good game. And you even get a VHS tape along with the game!

Nevertheless, it does have its limits. Most importantly, it's just too lightweight. The only way to play with two people is in training mode (and the second player has to be Mr. Perfect). Other than that, the only one-player option is to compete for the title in a series of one-on-one matches. No tag team, no Royal Rumble, absolutely no variation. Second, and that is probably even more surprising, it is way too easy. After the first few matches, there is basically no challenge anymore.

With some development, Ocean's WWF WrestleMania could have turned into a pretty good game, matching the standards of the better wrestling offerings on the consoles at the time. Only, it really should have been expanded. Pity they stopped before it became really interesting. 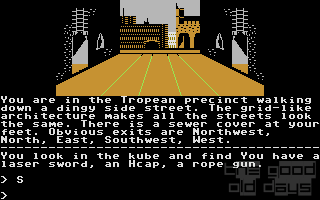