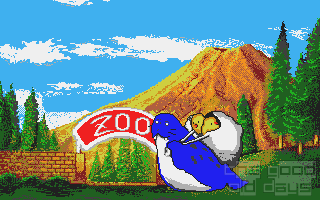 Every system of the 80s and early 90s had 'its' platformer. This immensely popular genre was especially liked by the companies because it was so easy to make those games! You didn't need any ground-breaking new ideas. The basics are always the same anyway: run from left to right (and sometimes up and down) and avoid your sprite is killed by the nasty monsters. To kill those, there were two general ways: shooting them (in whatever way) or jumping on their heads. Whoever came up with the latter must have smoked a bit too much of the wrong stuff! But for some reason, this concept stuck.

New Zealand Story belongs to the 'shooter type' though. That is actually quite surprising if you take a look at the story: a bunch of cute chicks (I'm talking about baby chickens) are enjoying their day in the zoo (er.... highly questionable story already). Suddenly, a blue walrus appears and grabs them all, puts them in a sack and imprisons them in cages (um.... yeah.... right....). One of the chicks has fallen out of the sack though and it now tries to free its friends.

This childish (not meant negatively!) setting would have implied the 'jumping on the heads'. But surprisingly enough, your 'character' is armed with a bow and shoots arrows! And you can even collect other weapons such as bombs or lasers later. So much for prejudice

Other than that, New Zealand Story follows the usual platformer standards.

What makes it above average is the level design. Each level has several 'stages' which are always very short. In each stage, you have to free one of your little friends from its cage. That gives the game structure and makes it a lot more playable! To get some change into the usual running and jumping, there are sometimes underwater passages (where you can't shoot, but you're also safe from air bombardement) and you even fly around a bit (in balloons etc). That's enough to keep you motivated.

The downside is the lack of any kind of 'energy bar'. You just have two lives, but you always lose one when you're hit by something. That can be kind of frustrating really! Overall, it's not that hard though since you can safely touch most enemies (just their shots are deadly) and other obstacles only turn up rarely. So it is really a nice game to waste some time with! 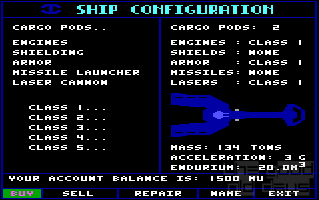