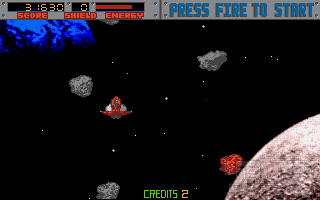 Blasteroids, along with Phobia and Spidertronic, was one of the first three original games I owned. Ironically enough, I owned it before I even got an Amiga. Oh well – looking at a box cover can be fun, too.

When the hardware arrived a few days later, too, Blasteroids quickly became my favourite game. Although I changed my mind about the relative quality of these three later, it's still quite clear what appealed to me in this game then: the quick accessability.

Blasteroids' nature as an arcade conversion shows. Instead of deep and epic gameplay, you immediately get quick action. Your task is to clear 9 or 16 levels (depending on the difficulty level) from all threats, i.e. to shoot everything in sight in Asteroids style.

To give the old idea a new twist, your spaceship has shapeshifting abilities. There's the Warrior, a heavily armoured flying tank with a slow firing rate, the Fighter with vast destructive power and the Speeder whose name really says it all. Switching between these three incarnations can be done at any time. Not that you'll use it very much as one of them is clearly the best...

Your ship can be upgraded further by picking up power-ups which destroyed enemies sometimes lose. Better shots, shield, additional energy - you name it.

The range of enemies includes differnt kinds of asteroids as well as different ships. They're all easily distinguishable and each behave in their own way. None are too exciting, but all are well-done. It should be noted that the big evil boss, Mukor, is one of the classiest in gaming history.

'He' alone can't save the solid game from mediocrity, though. In the end, Blasteroids is nothing but an ordinary Asteroids clone without any extraordinary appeal. Quick to get into, but also quick to forget again. 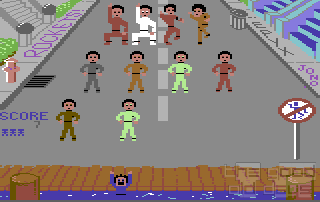