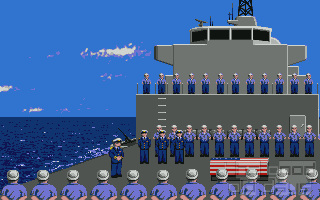 This is one I spent a lot of time with back in the days. At first glance, it's a simple aerial shooter, but there's more to it than that. Even though it's far from being a realistic simulation, there's a certain feel to the controls and general gameplay that draws you in, and before you know it, you really ARE crack pilot Butch Slayer, codename Fifi.

I discovered this title on Medway Boys disk #094 (see Comments/Links for group, disk, and download info), and it quickly became one of my faves. It's obvious from your co-pilots' blurbs that you shouldn't take this game too seriously, but the fun bits stop at those descriptions and the info you'll receive from your sidekicks, which is just the right mix of work & play for me.

The gameplay itself is altogether realistic, in the sense that you'll have to keep your eyes on the altimeter, air pressure, oxygen supply, weapons systems, radar, etc. You'll also want to remember to keep your brakes and gear where they should be, or you'll experience some interesting effects when nosediving on to a drug field or enemy carrier.

Heading for your target, you'll encounter enemy fighters, which will attack you from all directions. Air combat is fun, and the heatseeking Harpies behave more or less realistically. You have chaff and flares at your disposal to ward off any enemy missiles.

For ground targets, you use your Fury missiles, which need to be aimed correctly and from a certain distance/height. Depending on who's sitting behind you, you may receive helpful comments and systems info from your buddy, just like when you're landing or mistreating your plane beyond reasonable limits.

There are 6 co-pilots available, all with a different character and style. See the screenshots for an example. Try them all, they're all okay in a certain way. You'll probably end up with Digit though, 'cause he's the most reliable in the long run, and doesn't waffle too much. I don't like to be told my partner's about to dump his (half-digested) lunch in my neck just when I'm lining up with the flight deck.

The screenshots don't do this title justice, but for that, the game is to be blamed: I got so involved in my bombing runs that I only thought of the captures after the action was over. Also, it's not too easy to take a pic while you're in the middle of destroying an enemy plane. Anyway, you'll discover a lot more variety in screens and sights than indicated here.

The download is a packed ST disk image, which contains 2 files lifted off the Medway Boys disk. Run SNOW.PRG to start the game. I tested the disk on my original ST, and the image in (X)Steem. Should you run into trouble, grab med_094.st from the FTP site listed in the Comments/Links.

The graphics are all right. Ground patterns are your basic, standard fare of geometric shapes, but the cockpit and enemy fighters are above average when compared to similar games of the day. Sounds are effective and non-intrusive, and there's no in-game music apart from the mission screens.

Overall, this is a great one for letting off steam at the end of the day, and even when you've been through all stages and difficulty levels it remains highly playable. It's a bit short all right, and there isn't that much you can do after a while, but it definitely deserves to be in your ST collection.

Note: a joystick is not really required, but strongly recommended. 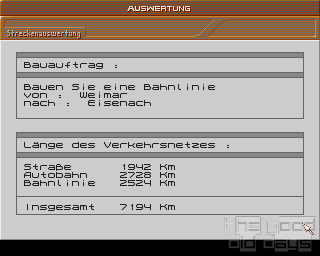