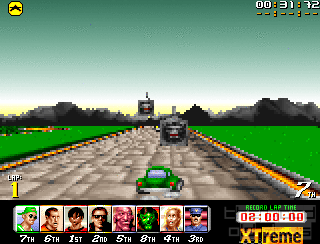 …and yet another Mario Kart clone. Just that unlike that game, XTreme Racing didn't kickstart a hugely successful series. Sure, on the already dying Amiga platform, how could it have? That may have been one of the reasons. Maybe there were others.

The game's most notable selling point is/was that it attempted to do “real” 3D. Where the countless Lotus style games always kept it simplistic, here you find… chunky pixel mode textures. Though this is where the issues already start. Like the developers of the Amiga 3D shooters of the time, the programmers from Silltunna had to face reality: the Amiga just wasn't made for this. So on any realistically available system, pixels are just quadrupled to achieve a playable somewhat smooth speed. Resulting in a weirdly coarse picture. 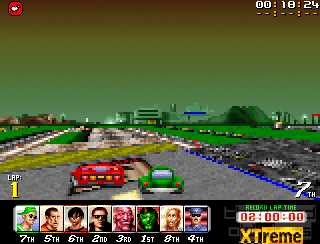 Fierce battle for 7th vs. 8th (soon to be lost)

This also takes its toll on the driver/car characterisation. Even in games where they all handle and drive exactly the same, characteristic sprites can do wonders in the minds of the players. Doesn't work out in this game at all. Courses are somewhat alright. Laps are short, sections clearly recognisable. Car handling, sporting a good dose of inertia, also gets a pass. Weapons can be picked up and used against other drivers and special squares spin the car around or propel it forward.

So it could be alright, even if not particularly exiciting. Though finally, most of this turns out useless. The thing is, this is one of those games where difficulty is totally out of balance. Drive faultlessly and you may (with some luck) be 6th out of 8 in the end. One single fault anywhere, anytime, and your chances of ever catching up to the computer drivers will be zero. Prepare for driving some more, totally frustrating laps to finish the race anyway (with no other cars close, usefulness of weapons is obviously zero as well). This issue is further increased by punishing losers on the price money: winners get to spend theirs to upgrade their cars between races, therefore decreasing player chances even further. 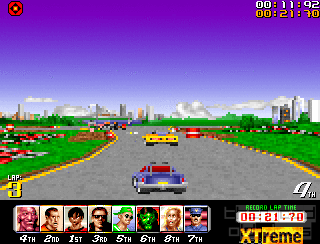 Wait, 4th on the last lap? How did this happen?

It gets a bit better in multiplayer mode. Two computers can be linked together, a four-way split-screen used on each. Meaning up to eight players can compete simultaneously. In such a setup, chances are initially equal at least. Nevertheless, the prevalent feeling remains that distribution between winners and losers depends mostly on luck rather than skill.

XTreme Racing is one of those games which come out when technically skilled engineers without any experience or talent for game design have a go. Graphical concept and multiplayer capabilities reek of ambition. Though design is totally unremarkable and lack of balancing dooms mere mortals to trail behind hopelessly, being lapped repeatedly to add insult to injury. This is not entertaining. At all.

Herr M.:
Hey the cover says it all!

MAXIMUM INTENSITY and Can you take the pace? I guess not, seems like the difficulty is too XTREMe. Well, when will racing game designers learn that it is not the graphics, nor the physics or an ace sound track but a good learning curve and smooth difficulty that keeps gamers playing? Off the top of my head the most fond memories of racing games where those which were easy to learn but hard to master, with an ever so slight increase of challenge from race to race. Like Screamer, Micro Machines or Need for Speed: Underground 2… OK the latter would be a prime example of cheating AI, but at least it did so in a good way.
Mr Creosote:
Feel free to share anything about XTreme Racing (1995) here!
[Reply] 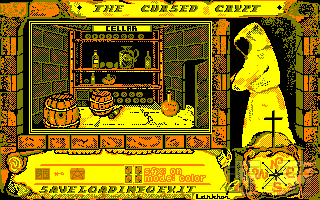